Today we debut our latest short, Mature starring Christina Parrish and Olivia Doud! Although things begin innocently enough, Mature demonstrates how quickly things can get out of hand at a sleepover.

Mature from Voltaic Video on Vimeo

So I’m leaving St. Louis this morning and feel the trip was an all around success. I shot four interviews, three of which were shot in the St. Louis Funny Bone. The unique thing about this club, besides its killer layout, was they still allowed smoking! Not that I smoke, but I bet it’s pretty rad to see puffs of smoke as jokes are being slung. Maybe not, anyways I thought it was cool.

Everything went off without a hitch except for a slight hiccup in my last interview with Kenny Kinds where Tiny (our EOS M) stopped recording randomly. It flashed big words about it stopping on the LCD and I was able to press record immediately but still concerning.

With that said, I want to thank Matt Conty, Josh Arnold, Bobby Jaycox, and Kenny Kinds for helping us get started and sharing their intriguing thoughts on several subjects. A lot of this footage will also be used in an upcoming Comedic Views season and I can’t wait to share an episode based around the concept of a Comedy Nemesis because the answers I got here in St. Louis were outstanding.

Here are some low resolution, test grades I did on screen captures from the shoot. Also a bonus pic of the Funny Bone’s front entrance.

So a little under 18 months ago, I received an email from Margie at Cap City Comedy Club asking whether I would like to be the official videographer for the Funniest Person In Austin (FPIA) contest.  I was grateful and equally shocked for the opportunity- I had taped maybe five shows at that point and had little to no experience.  Yet, two weeks later there I was, taping the opening preliminary round of the 27th FPIA on April 2nd, 2012.  Since then, we’ve (my wife Jen and I) cut together over 300 FPIA clips, amassed an endless amount of standup footage, all the while making many friends along the way and learning just how grateful we are to this community of comedic artists.

Little did I know, that email would start us on a path leading to this post- we’re going to make a feature length documentary about the FPIA contest!

I’m not going to reveal our entire plan, but I want this blog post to serve as the first of many, chronicling our journey.  This will not be a fly by night venture; our planned  completion date is late 2015, early 2016.  So why post now?  Several reasons-

Ok so that’s it for now.  We’re at the beginning and I’m a crummy writer so I’m stopping short.  I appreciate your support (you’re reading this so I assume you are complicit) and hope that if anything, you learn a bit from the blabbering that will ensue.

Currently the movie is titled Funniest.

So why not take our Blackmagic Cinema Camera?  It’s just too big.  I’m hoping to pick up one of the Blackmagic Pocket Cinema Cameras in the Spring, but until then our EOS M, which we’ve named Tiny, will have to do.

As I type this, the master file for our Comedic Views Velveeta Room episode, the Season 2 finale, is being exported. I’ve thought about writing up some kind of article to commemorate the occassion- something that catches my state of mind having now completed 24 episodes spanning interviews with 17 of our favorite comics and friends… so here we are.

Comedic Views is very special to me for a number of reasons. For one, it helps promote the amazing comedy scene we have here in Austin, Texas. My hope is that people stumble across these and learn something they didn’t or discover a comic they will grow to admire. Even seeing responses on Reddit like, “Hey, I know Danny Palumbo!” is awesome.

On a personal level, Comedic Views, or at least the concept of interviewing comics, is what transformed a hobby into a part-time career for my wife and me. A little over 2 years ago, I asked a comic if he would let us interview him on camera. Truthfully, I was desperate to work on some form of video production and figured an interview would be something to sink my teeth into for a month or so. After the 35 minute interview, I realized we needed B-Roll of him performing. As I was documenting that during a Punch show in the Summer of 2011, another comic asked if I could tape their set as they needed an audition set. And from that point forward, we continued to get requests for tapes, which eventually led to us taping a showcase, and then FPIA, etc. So although the first interview, will never see the light of day, it served as the blue print for the two seasons of material we’ve compiled thus far and resulted in the amazing experience we’ve had working with and befriending such talented folk.

Have you missed out on all the fun? Catch up here-

So some stats to throw at you-

We have friends to thank-

Without you guys, we have nothing. Thank you for letting us into your lives and giving us such great answers.

I also owe an apology to the following comics-

We had scheduled your interviews for the second season in February of this year but the timing just didn’t work. I promise, when we start rolling for the third season, you guys are our first stops.

And yes, we do plan to make a third, and likely fourth, season.

Finally, I couldn’t have done any of this without the person I owe the most appreciation to- my wife Jen. As an interviewer, her process is lightyears ahead of what I can produce (thus two interviews I conducted that are locked away in a vault). Her input, insistence on quality, and positive encouragement allowed us to complete these two seasons. I wouldn’t know what to do without her in general but Comedic Views is a team effort, and she does more than her share of the heavy lifting. 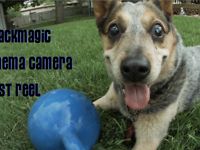 Shot with the Blackmagic Cinema Camera in ProRes. Grading done in FCPX. Lenses are the Rokinon 8mm 3.5 and the Canon 28-135mm USM.

Music is by Butch Walker. Song is Bodegas and Blood from The Spade.

Also, this stars our cats Punkin Head and Noodles as well as our Blue Heeler Moony.